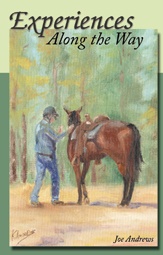 I was puzzled as I watched Krista working her horse in the hay field. I liked how soft and responsive Little Bit seemed. She went out on a circle with very gentle direction and no additional support. She stepped her hind foot under nicely, rocked back and came across with the shoulder; it all looked good. I’d been trying to help Krista figure out why some days she had an extraordinarily good time, and other days she was barely able to keep Little Bit under control. I knew this inconsistency should show up in the ground work. Then it hit me. As good as it looked physically, there was no mental connection between them. I asked Krista if she would like to see a different way to put her ground work exercises together, just to break up the monotony. She agreed, offering me the leadrope.

Leaving the shade of the cottonwood tree, I walked out into the grass, still damp from the last irrigating. I asked Little Bit to move her shoulder one step. She went out on a circle. I stopped her and tried again with the same result. Bending Little Bit toward me, I asked for her hip to yield away one step. Little Bit walked her hind end around her front end for half of a circle and lined up facing me. Although Little Bit was moving calmly and responding to very soft suggestions, the feel I presented was not communicating my intent; it was cueing a pattern. That’s where the mental connection had broken down.

This is exactly what Bill Dorrance talks about on page 343 of his book, True Horsemanship Through Feel. He says, “Don’t get into a pattern and repeat the same thing over and over again because the horse will stay more responsive to your feel if there’s variety worked into the things you do with him. The main problem with patterns is that the horse gets so he can’t follow a feel outside that pattern. You don’t want the horse to get an idea that he should be making any moves towards something he thinks is correct if it means that he avoids your feel to do it, because that’s the horse taking over, and he’s liable to do that if he’s just rehearsing those patterns.”

A hawk landed in one of the trees at the edge of the field and seemed to watch me as I worked with Little Bit one step at a time. I prepared her, getting the right bend in her body and shifting her balance to unweight the foot I wanted her to move. Then I did as little as possible to move that foot, releasing as soon as the movement started. If Little Bit did more than I asked, I stopped her and put her feet back where I wanted them. This level of precision resulted in getting her mind. Little Bit concentrated on me, understanding and acting on my intent.

Several months later, while Krista and I were riding up on the mesa behind the ranch, I commented on how great it was to have a calm, steady horse like Little Bit along to support my youngster. I was impressed with the adjustment Krista had made. Breaking out of her own pattern, she and Little Bit had regained their mental connection. Now Little Bit was the calm, consistent horse she had been striving for.